It is Safe to Dine with Us

We are open for indoor and patio dining following the rules of the 6 feet social distancing. Our staff is wearing masks for everyone’s safety and we continue to take all the precautions necessary.
Reservations are HIGHLY recommended on weekends due to limited space.

Live music on Fridays and Saturdays.

We are open Tuesday through Sunday starting at 5pm and Sunday Brunch 11am to 2pm (closed for lunch and Mondays).
Reserve your table with Open Table or call us to make a reservation (352) 433-2570.

Our bar area including the high tops, as well as our porch, are now open at full capacity.
We are keeping the 6 feet apart for ALL our dining rooms.
Dress code: Business casual 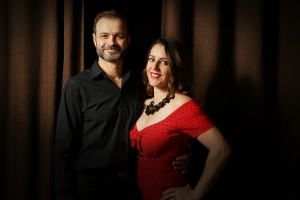 In France, the term “la cuisine” refers to the kitchen – a place in the home where most French parents spend a lot of time preparing food for their families.

The combination of fresh ingredients, time and love all mix together in this special place, and this is where the magic happens.

Patrice Perron, Executive Chef and Proprietor at La Cuisine, knows this recipe very well. Born and raised in Lyon, a city known around the world as the French capital of Gastronomy, the Perron family embraced its love of good food and good wine, making it a part of the family’s rich heritage and tradition.

“I always enjoyed helping my mother in the kitchen, watching closely as she prepared all sorts of foods from the ‘terroir’ – a French term meaning fresh ingredients native to the area,” recalls Perron. “She explored new recipes in the kitchen all the time, and if for some reason the recipe didn’t work?
She would say ‘just add more butter or cream,’” he laughs.

Perron’s father loved taking the family to the finest restaurants in town: La Tour Rose, Paul Bocuse, Orsi. “As a child, I had no idea I was experiencing some of the finest food in the world. Of course now, I have a much different appreciation and perspective,” says Perron.

Perron soon found himself drawn to ‘la cuisine,’ fascinated by its delectable delights and intrigued by the thrill of weaving his own touch on this rich, French heritage. 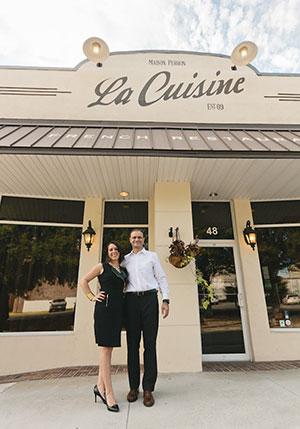 Things got serious once he started working at Daniel & Denise, a world renown, traditional French restaurant in Lyon. Under the direct tutelage of Chef Josef Viola — a master chef who in 2004 was awarded the Meilleur Ouvrier de France (MOF) by a board of examiners, including world famous chefs Joel Robuchon, Alain Ducasse and Paul Bocuse — Perron began to thrive.

And Viola became his mentor.

“Viola was fascinated that Elodie and I wanted to come to America to start a French restaurant, and he helped me a lot just by encouraging me to do so,” recalls Perron, fondly. Viola, who was featured on Anthony Bourdain’s “Parts Unknown” on CNN, has promised someday to come to Perron’s La Cuisine, to see for himself what Patrice and Elodie, have created (including nine Golden Spoon Awards from Florida Trend Magazine, and a HALL OF FAME in 2019).”

“Food and wine are like ambassadors for France. And by coming here, to Ocala, a place that has become home to Elodie, myself and our two children, it is a dream come true. And although we have been here since 2009, it feels like we are just getting started.”